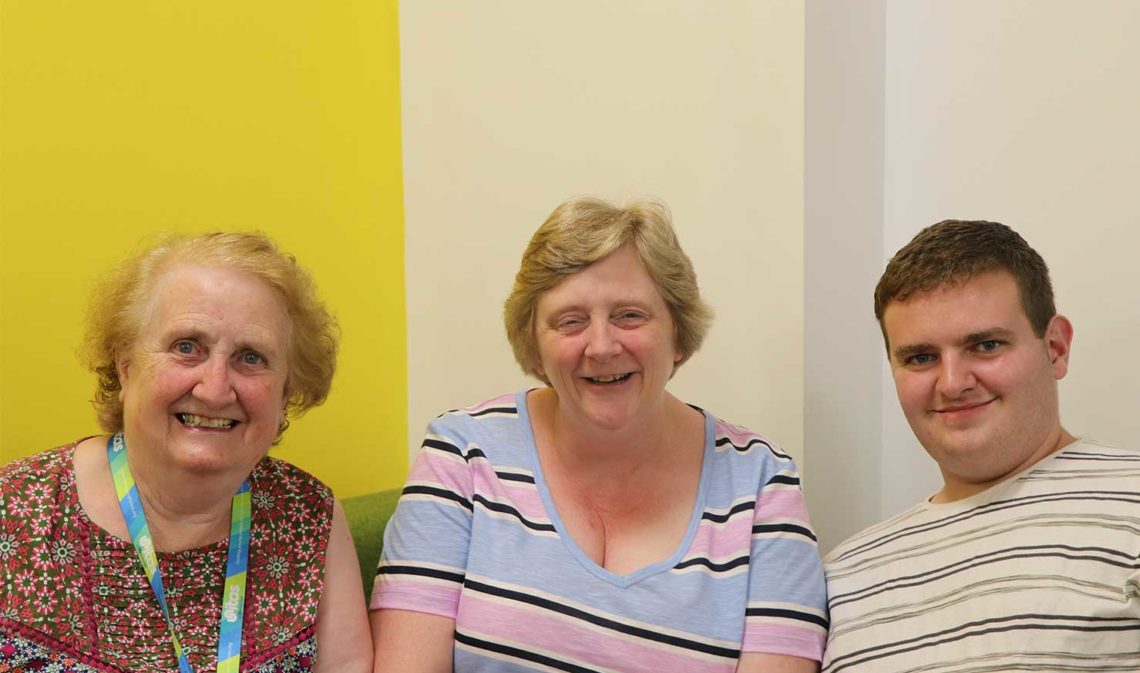 At Unitas we have a wonderful group of volunteers who give their time to support staff and young people at our Youth Zone.

Of the current 32 active volunteers (and growing) we have welcomed to our team, we have a local family consisting of three generations who have volunteered with us, two of them since before our opening on 23 June.

The well-loved trio, Steven, 20 and his mum, Paula, 48, and her mum Pauline, 75, who is known by everyone as ‘Nanny’, are a real asset to the Youth Zone, bringing with them a range of skills and experiences and of course lots of smiles and entertainment.

Steven was the first of the family to volunteer at Unitas after having finished his studies at college and joined as a member after learning about the support offered to young people with SEND. Steven has become a familiar and friendly face to both the young people and the team and can be found most mornings helping to stock items in the Unicafe.

It is clear to see how much Steven has grown within the past two months. For Steven, being within the same inclusive environment as a volunteer and as a member has meant he has befriended lots of new people, developed a range of skills, and gained lots of confidence.

Speaking of the positive impact volunteering has had on him, Steven said: “I enjoy working at Unicafe as I get to meet lots of new people, have fun and help the kids out. In my free time I like using the gym, lifting the weights and doing boxing. I also like being in the kitchen helping to make cookies and cakes.”

Steven has been so successful in his contribution as volunteer, he was offered a job as a sessional worker and continues to do brilliant work at the Unicafe.

Both his Mum and Nanny are hugely proud of Steven and credit him for introducing them to the same organisation which they both also now volunteer at.

Paula, who volunteers at Unitas one evening a week alongside her part time work, has spoken of how much she enjoys the process of being welcomed to Unitas by her son.

She said: “As a parent myself, I’m proud of the fact that it’s not gone from the older generation down but the younger generation up so for me volunteering, and the same for my mum, is down to my son for starting it all off.”

Nanny, who has been with Unitas for just a few weeks, wasted no time in getting involved with our first ever Summer Holiday Club. With 30 years of experience of working with young people behind her, after running her own out-of-school play scheme, she had been busy supporting Junior members to get creative in the Arts room which has resulted in some fantastic pieces of work being produced.

A highlight for Nanny so far has been culture week where she helped a group of young people produce tree sculptures.

She said: “For me working with young people is a pleasure. Getting them involved in arts and crafts keeps them away from the computers and gets them creating things they wouldn’t have otherwise thought about.”

Unitas’ Volunteer and Staff Training Manager David Barbary said: “We are thrilled that Steven, Paula and Nanny have joined us at Unitas and are thankful for all their passion, dedication and hard work that they input in all their tasks. We are even more delighted to know that they would recommend Unitas to other potential volunteers in the future.”

This generosity shown by this fantastic family has been a huge boost for Unitas and proves that volunteering benefits everyone, no matter what their age or background.

Paula added: “I would recommend volunteering at Unitas 100%. It gives you joy; it gives you fun, knackers you out but it’s the best thing and you are giving something back and to me everyone at some stage in their lives should give something back. It’s for the next generation after all.”