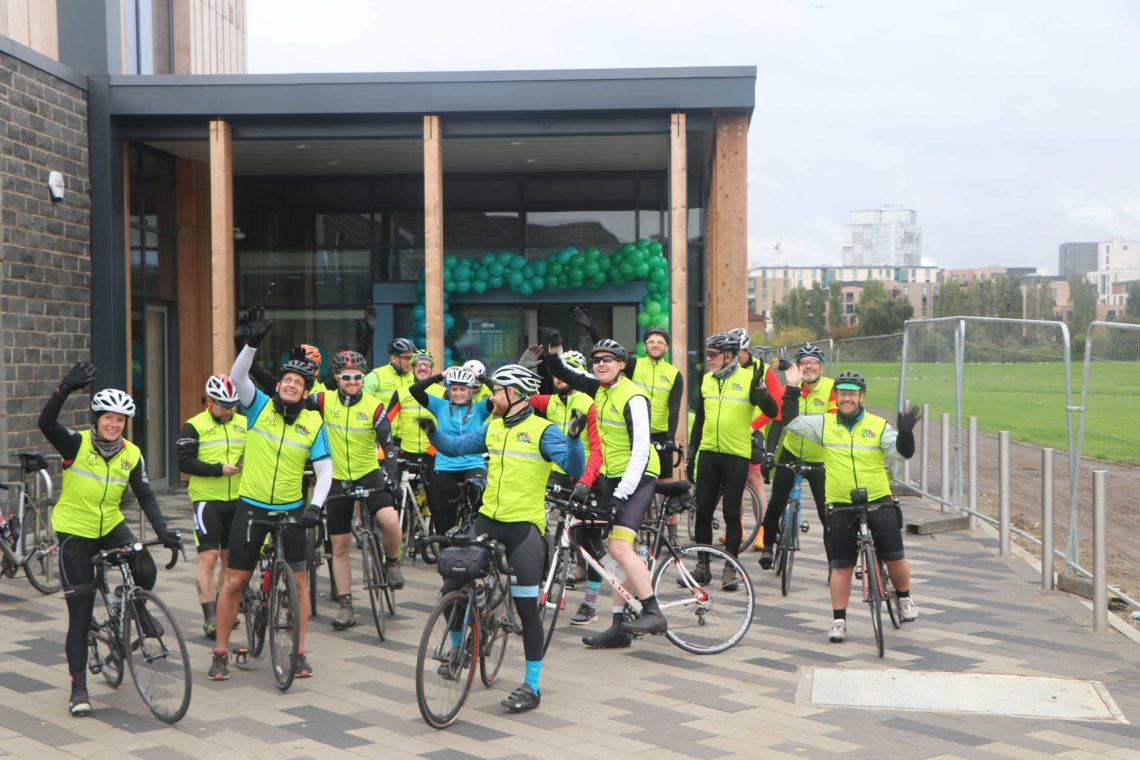 The team of 19 cyclists received a welcoming reception at the Youth Zone on their last day of Tour de Youth Zones.

On Friday 25 October 2019 the Unitas team alongside our ‘Spookitas’ October Half Term Holiday Club members excitedly gathered outside to greet the cyclists as they rode into the Youth Zone.

Our young people had been eagerly anticipating the arrival of the Tour de Youth Zones team throughout the Holiday Club week. To commemorate the cyclists’ achievement on reaching Barnet, they prepared ‘Welcome to Unitas’ placards and banners as well as sweet bakes to offer the team on their entrance to the Youth Zone.

The cyclists had embarked on the incredible Tour de Youth Zones journey on Monday 20 October 2019, setting off from Carlisle Youth Zone and aiming to cycle 471 miles to reach Legacy Youth Zone in Croydon.

In just 5 days the team rode across the country, stopping at every Youth Zone inbetween, with the shared goal of raising as much money for their own Youth Zone or for the OnSide network.

The tour was set up as a team effort to enrich young people’s lives with the support of the public via sponsorships and several fundraisers who joined the cyclists on different stretches of the journey.

On the team’s finale day, the cyclists set off in the early hours from Wolverhampton’s The Way Youth Zone, to reach Unitas just before noon.

Our Holiday Club members made a walkway for the cyclists, gathering at either side and joyously high-fiving them as the team reached a gentle stop at the Unitas’ coloured balloon arch decorating the entrance.

The cyclists were then met with more enthusiastic crowds awaiting inside the Youth Zone, with our young people dressed for the momentous occasion donning the Tour de Youth Zones T-Shirts.

To further mark the team’s visit to Unitas, the exchanging of the batons took place – adding a piece of memorabilia to the Tour de Youth Zones and illustrating the connection of the OnSide network.

As everyone gathered around for a photo opportunity, Unitas was gifted The Way’s impressive wolf-sculptured baton before we handed over our bright and starry baton to Future Youth Zone’s CEO Gavin.

The cyclists then experienced some downtime, catching up with the Unitas team and refuelling on tea, coffee and delectable treats made by our young people.

However, the team couldn’t stop for long as they soon set off to make the penultimate stop at Barking and Dagenham’s Future Youth Zone before reaching the finishing line at Legacy Youth Zone.

One of the cyclists, OnSide Communications Manager (South), Greg Farrimond described his favourite moments upon taking on such a life-changing adventure.

He said: ‘The Tour de Youth Zones was an absolutely amazing experience, one which tested us all physically and mentally.

My personal highlight of an extraordinary trip was arriving in London Friday. The reception we got from young people at Unitas on our first stop of the day was incredible and just the boost we needed to spur us on to Barking and Dagenham and then Croydon. A huge thank you to everyone who supported us.’

Everyone at Unitas was delighted to be part of the Tour de Youth Zones journey and congratulate the team on raising a phenomenal £50,000 for the OnSide Youth Zones network. Well done all!